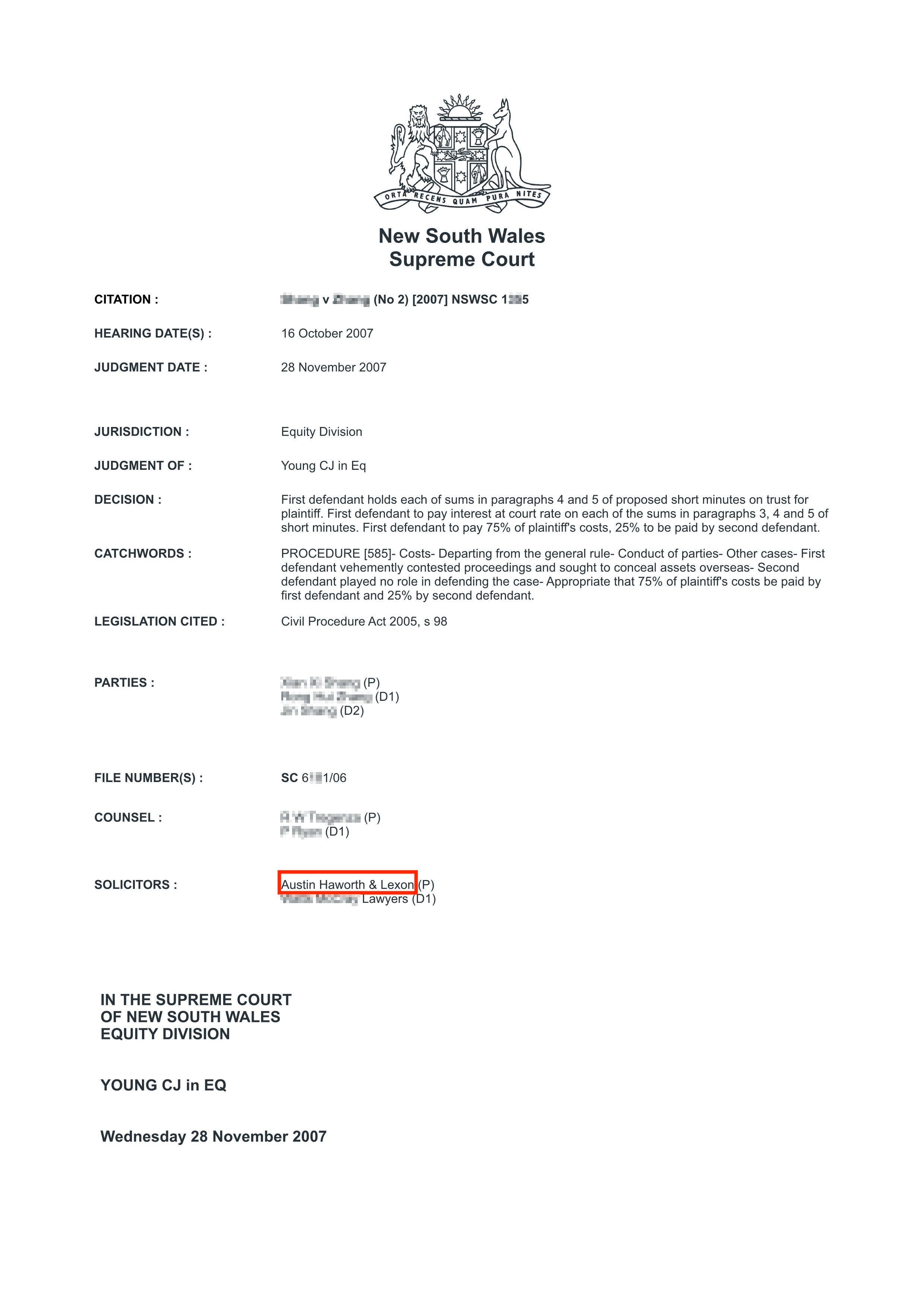 IN THE SUPREME COURT

1 HIS HONOUR: I gave reasons for judgment in these proceedings basically in the plaintiff’s favour on 8 August last (coded [2007] NSWSC 856). I stood the matter over for short minutes to be produced.

2 When I was considering the draft short minutes of order, various questions were raised. There was oral argument and written submissions over a period of two months and, on 16 October 2007, in view of time constraints, I reserved my decision. I now give that decision and the reasons therefor.

3 Most of the matters originally in dispute were resolved or I made rulings during the argument which were accepted by the parties. The matters which remained outstanding on 16 October were:

(1) Whether there was “double dipping” by the plaintiff if orders were made as proposed in items 4 and 5;

4 I will deal with each of these matters in turn and then deal with the other adjustments that need to be made to the short minutes under heading (4).

5 (1) Paragraphs 4 and 5 of the short minutes provided by the plaintiff state:

6 Ms RXXn for the first defendant puts that both these orders should not be made as there is duplication.

8 In paragraph 36 of my original judgment I said that:

and she later transferred the fund into her own name.

10 (2) The argument here is that as the plaintiff has chosen to take the property which was purchased by the defendants with the plaintiff’s money and as the value of that property has risen, he has his betterment and it would be unfair to allow interest as well.

11 However, the interest claimed is only on the amounts which were in bank accounts in which the first defendant gained interest and were drawn from the mortgages to Westpac and Macquarie Bank on which the plaintiff has been paying interest.

12 Interest should be paid and at the court rate.

13 (3) The principal argument is that there are two principal defendants, Ms ZhXXg and JXX ShXXg. Whilst, normally, it is appropriate to order that each of joint defendants be jointly and severally liable for the costs of an unsuccessful defence, the present case has its peculiarities and Ms ZhXXg submits that the proper order is that she pay only one half of the plaintiff’s costs.

14 JXX ShXXg is the plaintiff’s son and, in one sense, was the principal person in default. The plaintiff is the father of JXX ShXXg and JXX ShXXg had been given access to his father’s Australian wealth which he used to benefit himself and Ms ZhXXg. When Ms ZhXXg bore JXX ShXXg’s child, JXX ShXXg was withdrawn from Australia and Ms ZhXXg was sued to give up the property purchased with the plaintiff’s money and not given any maintenance for the child.

15 As I noted in my earlier reasons, the plaintiff clearly considered that Ms ZhXXg was the prime source of the evil done to him. She was older than JXX ShXXg and she had been put in a tutelage relationship with JXX ShXXg which she abused when she bore JXX ShXXg a child.

17 The decision on the proposition put by Ms ZhXXg is not one which is likely to be assisted by any previous decision: I will approach it on basic principles.

18 Where unsuccessful defendants are in basically the same interest, it is appropriate that they be jointly and severally responsible for the plaintiff’s costs. Contribution can be worked out between them in due course, but the “innocent” plaintiff will first be paid.

19 Where, as here, one defendant has decamped to China and appears now to be in the plaintiff’s camp, the principle in the previous paragraph carries much less weight.

20 Whilst it may well be said that JXX ShXXg was the principal defaulter, the property ended up with Ms ZhXXg; she not only vehemently opposed the plaintiff in his attempt to get back the property, but also deliberately endeavoured to hide assets by placing them overseas in other peoples’ names.

21 The length of the trial was governed by Ms ZhXXg’s attitudes. However, it must be said that JXX ShXXg left everything to her to defend the case. It is arguable whether he did this voluntarily or because of the plaintiff’s influence on him.

22 There is the further point that, again, because of the plaintiff’s probable influence, Ms ZhXXg is left with the burden of maintaining the child of the relationship without assistance. I believe that this is a relevant matter to take into account, though not one with great weight.

23 Putting all this together, I consider that the proper order is that the first defendant pay 75% of the plaintiff’s costs and the second defendant 25% of those costs.

24 There was a suggestion that Ms ZhXXg’s mother, Ms LX, should pay some costs. However, she never actually became a party and no order can be made against her. In any event, she was really just a nominee of Ms ZhXXg.

26 In the discussion, I intimated that the appropriate date was 16 November 2007. However, it would appear that no final order was made and that a formal order must now be made.

27 In view of the delay of these reasons, the first defendant has already had more than 35 days after the 16 October 2007. However, the first defendant must be given a few weeks to order her accommodation, there is no frantic hurry to have her vacate as any conveyancing transaction will take at least six weeks to settle. The appropriate date would seem to me to be early in 2008, say, the first Monday in the new year, Monday, 7 January 2008.

28 It is unfortunate that the argument on the short minutes extended from 20 August to 16 October, and that then, because of my three weeks’ leave occurring immediately after 16 October, the final rulings are only now being made.

29 I am a little concerned that this intermittent approach may mean that I may have inadvertently overlooked some minor matter. In any event, a final form of orders has to be brought in. I will list the matter for mention on the Tuesday following the delivery of these further reasons for that to occur.