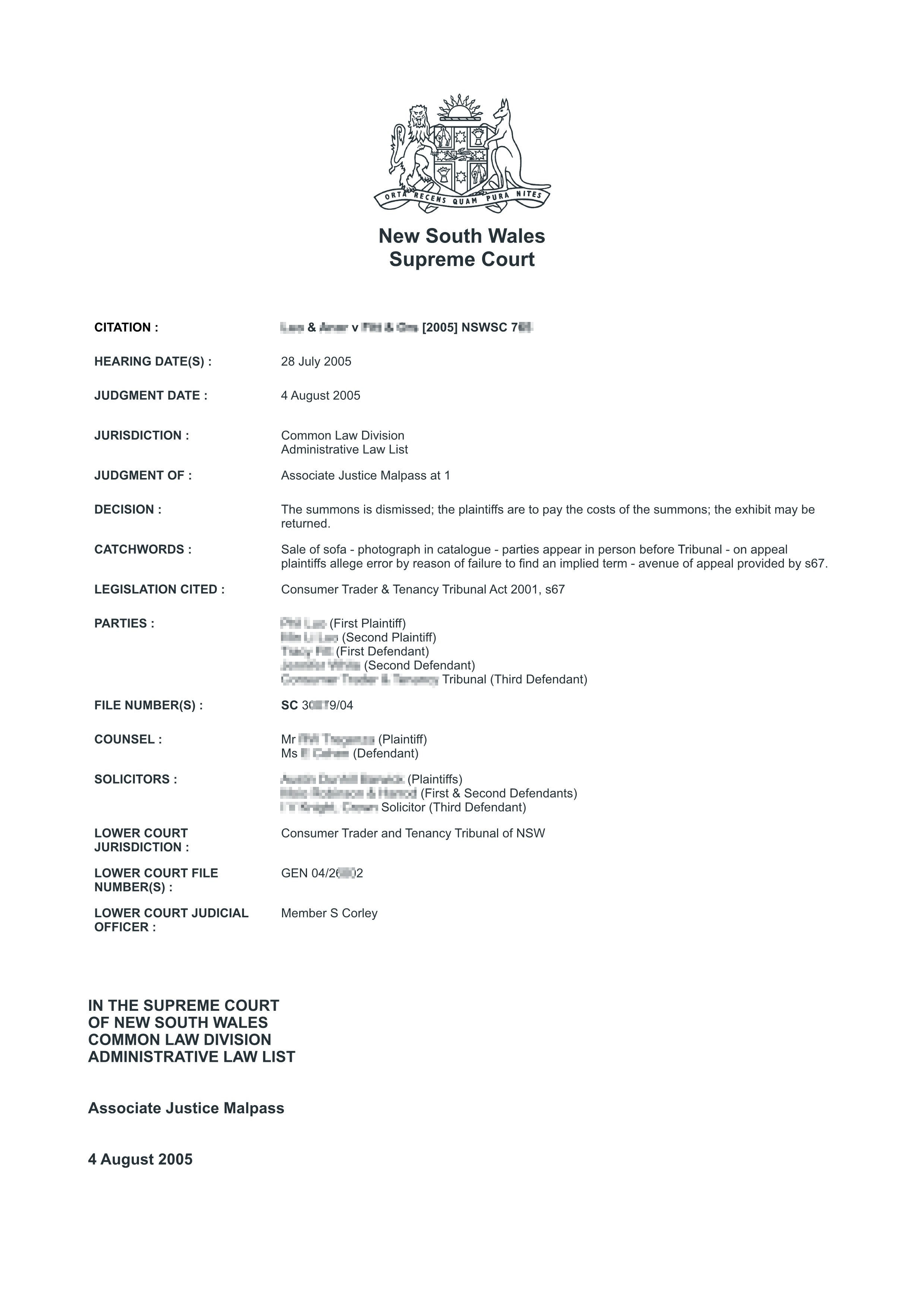 IN THE SUPREME COURT

1 His Honour: The first and second defendants (the defendants) carry on business as interior designers using the business name “WhiXX and SilXXX Design”. The plaintiffs engaged them to provide services.

2 DurXXta UphoXXXery Limited (DuXXXta) is an English manufacturer and its goods are retailed by LX MeXXier’s Fine Furnishing Pty Limited (LX MeXXier’s), which has a store on the Gold Coast.

3 LX MeXXier’s published a catalogue which contained a photograph of a DuXXXta sofa. It was marketed as a “Diplomat”. The defendants showed the catalogue to the plaintiffs. One such sofa was located at the Gold Coast store.

5 The plaintiffs paid the purchase price for the sofa. It was delivered on 17 December 2003. It was immediately rejected by them and returned to LX MeXXier’s.

6 There were two grounds upon which it was rejected. The first was because the fabric was not velvet. The second was that the colour was too dark (or too black).

7 The plaintiffs were offered a credit on certain terms. The offer did not see a resolution of the dispute.

8 The plaintiffs brought an application in the Consumer Trader & Tenancy Tribunal (the Tribunal) to recover the sum of $25,000.00. A disputed hearing took place. None of the parties were legally represented. The claim was dismissed. Written reasons dated 19 August 2004 were delivered by the Tribunal.

10 On 22 September 2004, the plaintiffs filed a summons in this court. It purports to propound an appeal pursuant to s67 of the Consumer Trader & Tenancy Tribunal Act 2001 (the Act).

12 The section is intended to provide a narrow avenue of appeal. The avenue is not equivalent to an avenue of appeal available where there has been error in point of law. There is authority for the proposition that it should be confined to a pure question of law.

13 On one view of the matter, the appeal may have been brought out of time. If that be the case, the plaintiffs seek an extension of time. Whilst the defendants concede that there are reasonable reasons for the granting of the extension, such application is opposed.

14 Whilst any delay has been adequately explained, it would be futile to grant an extension if the appeal is lacking in merit. Accordingly, I shall first look at the question of the merits of the appeal.

15 The Tribunal had before it oral evidence and other material (including statements and other documentation). There was no written agreement. It also had before it the catalogue (and the photograph contained therein of the sofa) and a sample of the fabric (it was called an “arm cap”).

16 The Tribunal determined that what had been delivered to the plaintiffs was a “Diplomat” sofa that had been manufactured by DuXXXta.

17 The Tribunal rejected the contention that the plaintiffs were entitled to a velvet fabric. It was not satisfied that any representation had been made that the covering fabric would be velvet.

18 The Tribunal’s reasons for decision contain the following:-

In my view the problem has arisen because both the Respondents and the Applicants relied upon a magazine photograph of the Diplomat sofa in choosing this item of furniture. The magazine photograph uses lighting in a way that gives greater contrast to the black and gold colours of the sofa. Although on a close inspection the photograph is clearly of the Diplomat sofa, the overall impression given by the photograph does differ from the actual item. The actual item has a more muted appearance, which some may consider more desirable although this is clearly a matter of personal taste.

Ultimately, on the evidence presented I do not believe there is a legal basis upon which the Applicants’ claim can succeed. The Applicants agreed to purchase a Diplomat sofa manufactured by DuXXXta, this is what they received. It is unfortunate that the magazine photograph did not give the most accurate impression of the sofa, however it should be commonly known that it is difficult to appreciate the exact depth or shade of colour of an item from a photograph.

Accordingly I believe there is no alternative but to dismiss this claim.

I note that LX MeXXiers currently have possession of the sofa and that they will provide an equivalent amount of credit to the Applicants if the Applicants choose to take this option rather than taking delivery of the sofa.

19 It is accepted that the decision made in respect of the fabric involved a finding of fact and cannot be the subject of an appeal pursuant to s67 of the Act.

20 There are eight grounds of appeal set forth in the summons. Not all of them were pressed. Certain of them relate to matters which could not give rise to an appeal pursuant to s67 (inter alia, a contention of a finding made where there was insufficient evidence and a contention of failure to give sufficient reasons).

21 It is unnecessary to deal expressly with all of the grounds enumerated in the summons. It suffices to concentrate on that which was the subject of most of them and of oral argument.

22 Primarily, it was argued that what took place was a sale by description and that a term was implied pursuant to s18 of the Sale of Goods Act 1923.

24 Whether or not the agreement was a sale by description gave rise to issue between the parties in this court. It was not a matter ventilated in the hearing before the Tribunal. It is not a question that needs to be determined in this appeal.

25 Indeed, it would be surprising if any matters of law were agitated by the parties. The Tribunal was left to do its best on the limited legal assistance that could be given to it by the parties.

26 The relevant reasons are briefly expressed. It was concluded that the plaintiffs had failed to demonstrate any legal basis for their claim.

27 The contract found to be made between the parties was identified (to purchase a “Diplomat” sofa manufactured by DuXXXta). It was found that the defendants had performed the contract.

28 It seems to me that the Tribunal came to the view that the photograph was not a part of the contractual arrangements reached between the parties. It also came to the view that any difference between what was presented by the photograph and the sofa itself concerning depth or shade of coulour was of no significance. These were views that were reasonably open on the material before it. Even if a different approach were to be taken on these matters, it seems to me that the findings are not appealable in this court.

29 I have taken into consideration all of the matters argued on behalf of the plaintiffs. The plaintiffs bear the onus of satisfying the court that the decision of the Tribunal should be disturbed. In my view, the plaintiffs have failed to discharge that onus.

30 In the circumstances, it would be futile to grant any extension of time.

31 The appeal fails. The summons is dismissed. The plaintiffs are to pay the costs of the summons. The exhibit may be returned.