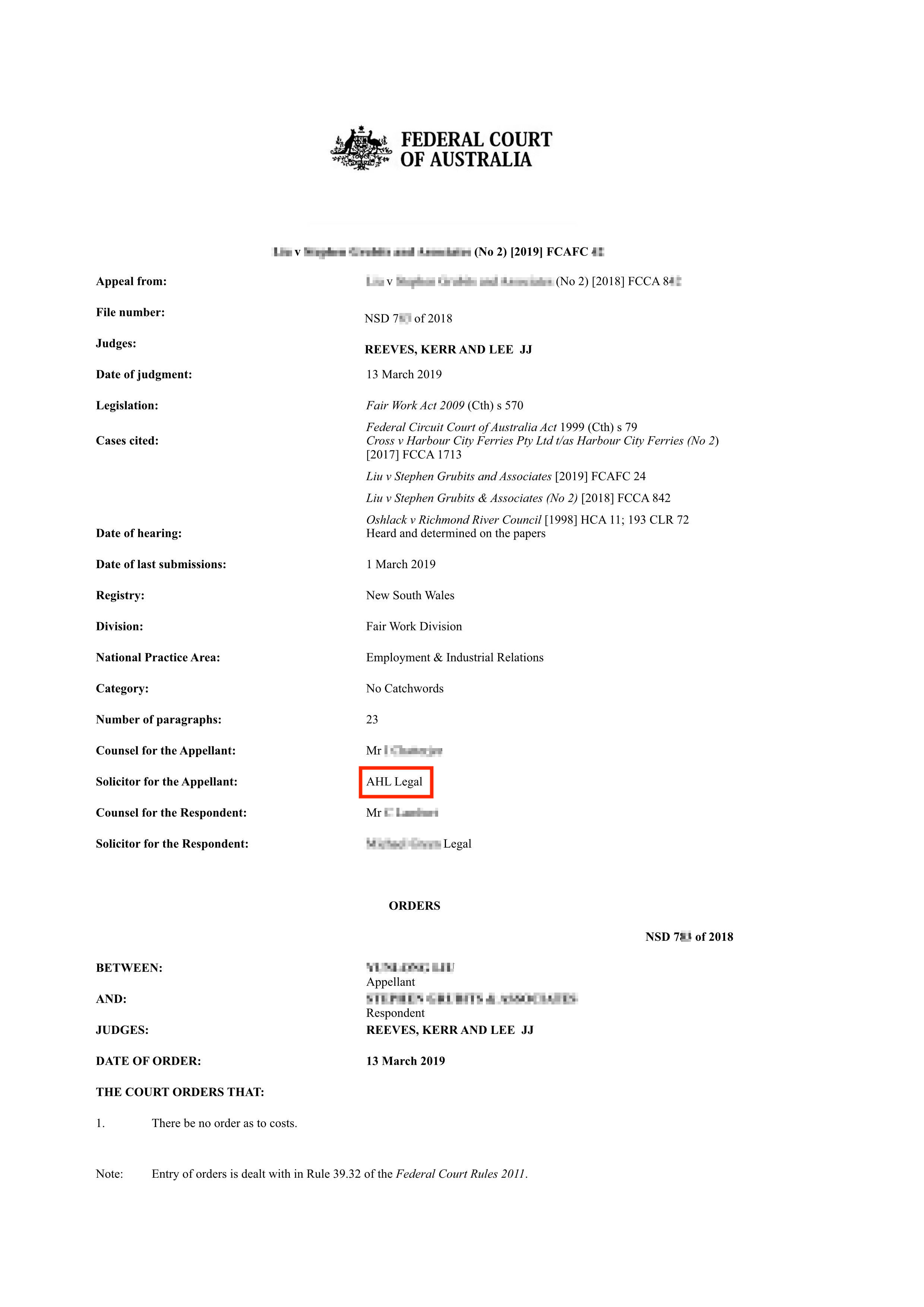 THE COURT ORDERS THAT:

There be no order as to costs.

On 12 February 2019 the Court delivered reasons for dismissing an appeal from a costs order made in the Federal Circuit Court of Australia (FCCA): LXX v StXXXen GrXXits and Associates [2019] FCAFC 24 (GrXXits). That costs order had been made in relation to an application under the Fair Work Act 2009 (Cth) (FW Act). The unsuccessful appellant had contended that the FCCA had no power to make such an order.

On 7 March 2019 the Court was made aware of a request. These are our reasons.

As a general rule, in an appeal determined by this Court costs follow the event. However, as we observed in GrXXits at [13], s 570 of the FW Act provides that a party may be ordered to pay costs with respect to matters arising under that Act only in the circumstances set out in subs (2) (a), (b), or (c) of that section. That constraint applies to this appeal.

(1) A party to proceedings (including an appeal) in a court (including a court of a State or Territory) in relation to a matter arising under this Act may be ordered by the court to pay costs incurred by another party to the proceedings only in accordance with subsection (2) or section 569 or 569A.

(2) The party may be ordered to pay the costs only if:

(a) the court is satisfied that the party instituted the proceedings vexatiously or without reasonable cause; or

(b) the court is satisfied that the party’s unreasonable act or omission caused the other party to incur the costs; or

(c) the court is satisfied of both of the following:

(i) the party unreasonably refused to participate in a matter before the FWC;

(ii) the matter arose from the same facts as the proceedings.

The appellant submits that he has not engaged in any unreasonable acts or omissions causing the respondent to incur additional costs. He accepts that his notice of appeal as initially filed was not in the correct form, but submits that prior to the hearing of the appeal his contentions were “reduced to cogent grounds” after he had obtained legal representation.

The appellant submits that, although the appeal was dismissed, it was not brought vexatiously or without reasonable cause, and was at least arguable. In that regard, he submits that a judge of this Court had granted him leave with respect to the issue; that the construction of s 570 of the FW Act contended for by the appellant was consistent with the decision in Cross v Harbour City Ferries Pty Ltd t/as Harbour City Ferries (No 2) [2017] FCCA 1713; and that his contention that s 570 (and equivalent predecessors) operates as a restriction on a general power to award costs rather than as a source of power was consistent with the reasoning of numerous decisions of this Court (both single judge and Full Court), although in a different context.

The appellant submits that costs orders are compensatory, citing Oshlack v Richmond River Council [1998] HCA 11; 193 CLR 72 per Gaudron and Gummow JJ at 89. In circumstances where the respondent’s proposed construction of s 79 of the Federal Circuit Court of Australia Act 1999 (Cth) was rejected, and the issues that were dispositive of the appeal were not identified by the respondent prior to the hearing, the appellant submits it is inappropriate that an order for costs be made.

The respondent submits that the appeal is the culmination of proceedings improperly conducted and maintained by the appellant, which from the outset had no reasonable prospects of success. The respondent would not have been put to the cost of defending the appeal, despite the fact that the dispositive issues were not initially raised, if the appellant had not pursued proceedings entirely lacking prospects of success. The respondent submits that the Court should have regard to the appellant’s course of conduct from the commencement of the proceedings before the Fair Work Commission in October 2016, given that the appeal “springs entirely” from misconceived applications to the FCCA and to this Court.

The respondent notes that the appellant initially sought to apply for an extension of time using a FCCA form bearing the FCCA file number (being the file number allocated to the proceeding from which he sought to appeal). The grounds of appeal identified therein contained “verbose ramblings” and sought to introduce new evidence on appeal. The respondent notes that the accompanying affidavits were also incorrectly labelled with the FCCA file number and contained confusing handwritten amendments.

The respondent sets out the extensive case management necessitated in both this proceeding and NSD2X/2018 by the appellant’s conduct including his requests to adjourn listings for medical reasons and attempts to agitate new matters on appeal. The respondent submits that it incurred additional expenses as a result.

Citing our reasons at [18]-[19] (reproduced below) the respondent contends that the appeal lacked any real prospects of success:

... The logic of the appellant’s argument would be that costs could be awarded in FW Act matters by the Federal Court or any eligible State or Territory court but not by the Federal Circuit Court. To describe that result as anomalous would be an exercise in understatement (apart from constituting a result which means that the legislative intention as revealed by the EM must have miscarried).

When s 570 is construed in accordance with principle, the contention that there is a want of statutory power to award costs by the primary judge in this matter arising under the FW Act is misconceived.

The respondent submits that the appellant’s decision to pursue an entirely misconceived appeal was both reflective of and consistent with the unreasonable manner in which the appellant had conducted the entirety of his proceedings since October 2016.

The appellant’s amended notice of appeal filed pursuant to the orders of Lee J of 14 September 2018 advanced a single ground of appeal. The only issue raised was whether the FCCA had power to make the costs order it had made. That was a question purely of statutory interpretation.

The respondent has had the benefit of a costs order in respect of the grounds intended to be pressed but for which leave to appeal was refused. An order for costs in the respondent’s favour was made in the substantive proceedings in the court below, and in consequence of our rejection of the appeal that order stands.

We accept that it is implicit that in making such costs orders both the primary judge and Lee J must have been satisfied that the provisions of s 570 of the FW Act had been satisfied with respect to the conduct of the appellant in the proceedings as then before them.

The appeal required this Court to give attention to a significant point of statutory construction neither entirely convincingly addressed by the primary judge nor previously the subject of appellate determination.

Whatever the vices of the appellant’s prior conduct of this litigation were, we are unpersuaded that the appeal he advanced as determined by this Court was other than properly advanced on arguable grounds, notwithstanding our emphatic rejection of it.

In those circumstances, the provisions of s 570 of the FW Act were not enlivened. We are not satisfied that any of the conditions in s 570(2) have been met such as to justify a costs order being made against the appellant.

I certify that the preceding twenty-three (23) numbered paragraphs are a true copy of the Reasons for Judgment herein of the Honourable Justices Reeves, Kerr and Lee.