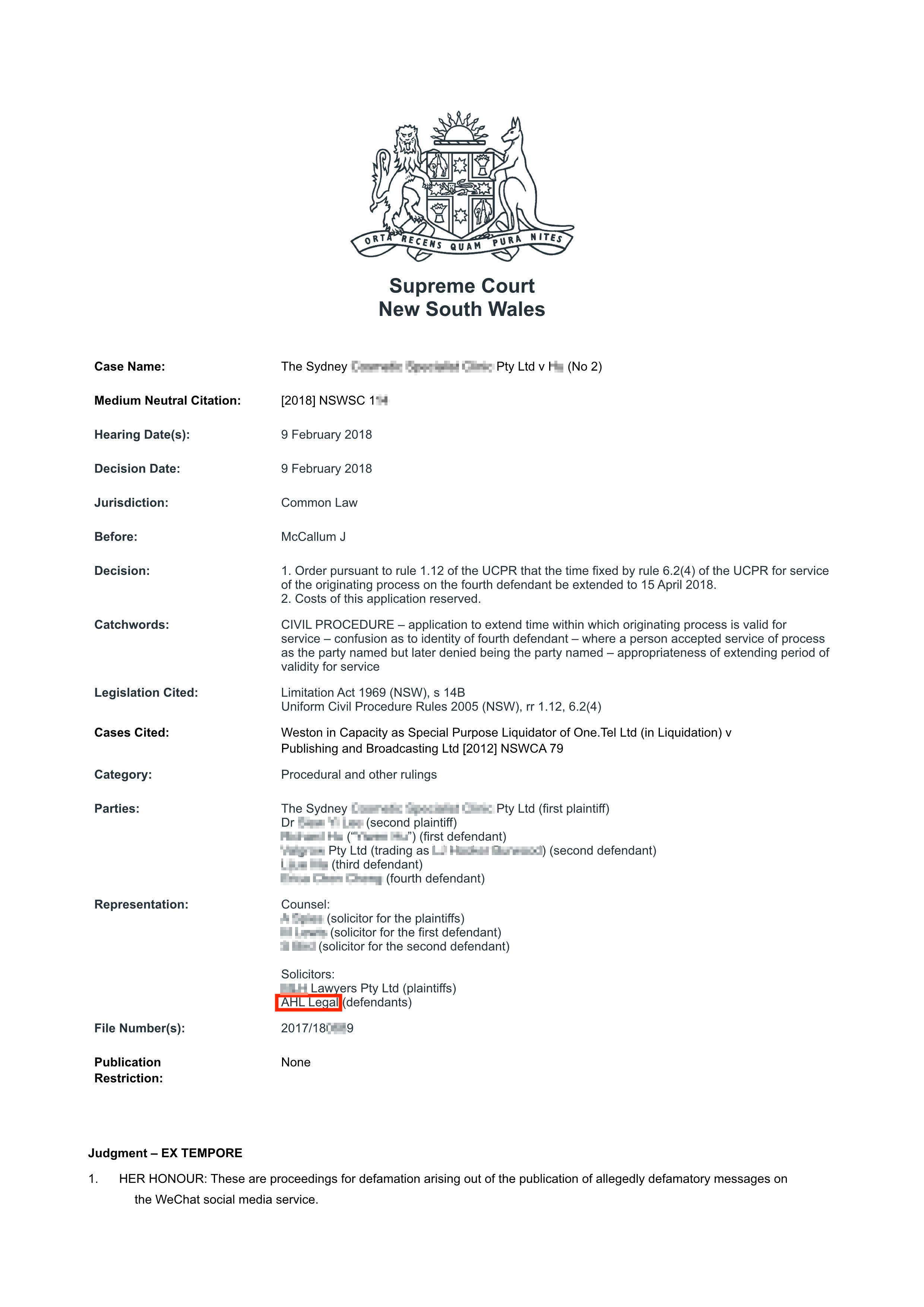 HER HONOUR: These are proceedings for defamation arising out of the publication of allegedly defamatory messages on the WeChat social media service.

The proceedings were commenced by statement of claim filed 16 June 2017. That was shortly before the expiry of the 12-month limitation period fixed by s 14B of the Limitation Act 1969 (NSW), the original publications having allegedly been made between 18 and 19 June 2016.

The original statement of claim named four defendants. Three have been served with the originating process and are now participating actively in the proceedings. The fourth defendant named in the statement of claim is ErXXa ChXX ChXXg. The plaintiff has encountered considerable difficulty serving the originating process on her and now seeks an extension of the time within which it is valid for service (which, under r 6.2(4) of the Uniform Civil Procedure Rules 2005 (NSW), is six months).

The application is supported by two affidavits sworn by the solicitor for the plaintiff, ShXXg HXX LXX, sworn 14 December 2017 and 31 January 2018. In short, the evidence establishes that the plaintiffs have made many attempts to serve the person they understood to be ErXXa ChXX ChXXg, as identified by a WeChat name. On 21 September 2017, Mr LXX had a telephone conversation with a person living at premises associated with an E ChXXg. He asked whether ErXXa ChXXg was available. He was told that she was not home at the moment but would be home later. During the conversation it was revealed that Mr LXX was calling about "a legal matter". The following day, personal service was effected on a person who identified herself to the process server as ErXXa ChXX ChXXg but subsequently, when an amended pleading was sought to be served on that person, she identified herself as ErXXa BXX ChXXg. Following further correspondence, she sent a statutory declaration to the solicitor denying that she had ever been known as ErXXa ChXX ChXXg.

The plaintiffs now find themselves in the difficult position of not knowing whether the person who was served with the originating process is the person intended to be sued as the fourth defendant in the proceedings or not. If she is not that person, the plaintiffs have some apprehension as to the proper name of the fourth defendant, but their inquiries in that respect are ongoing.

In a helpful outline of submissions handed up by Ms SpXXX on behalf of the plaintiffs, reliance is placed on the decision of Sackville J in Weston in Capacity as Special Purpose Liquidator of One.Tel Ltd (in Liquidation) v Publishing and Broadcasting Ltd [2012] NSWCA 79 at [20] which, in short, establishes that a plaintiff must have a good reason for seeking an extension of the period in which an originating process is valid for service.

The considerable lengths to which the plaintiffs' solicitor has gone to effect service and the confusing exchanges with the person who originally accepted that she was ErXXa ChXX ChXXg but subsequently asserted otherwise have persuaded me that this is an appropriate case in which the time for which the originating process is valid for service should be extended.