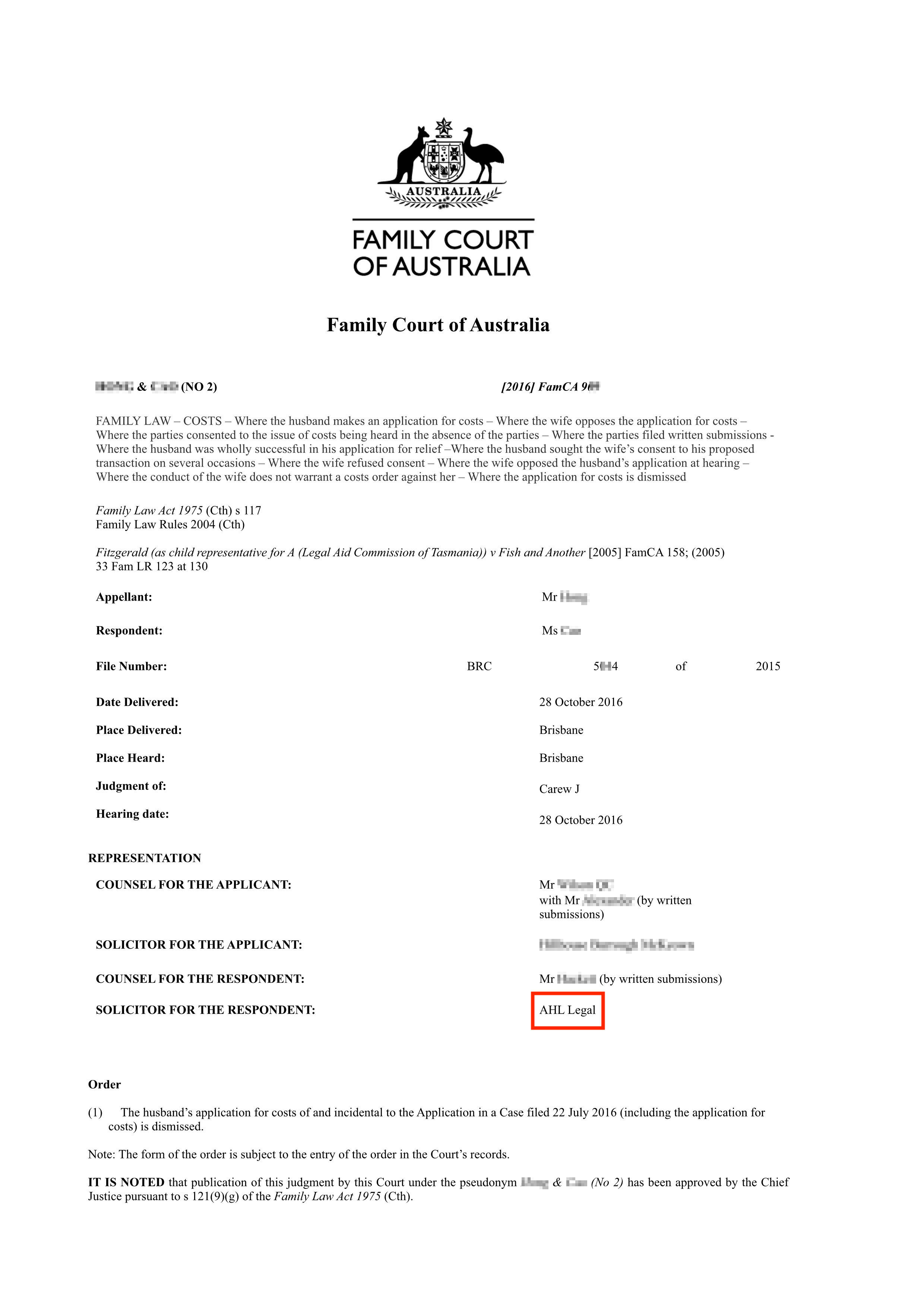 IT IS NOTED that publication of this judgment by this Court under the pseudonym HXXg & CXX (No 2) has been approved by the Chief Justice pursuant to s 121(9)(g) of the Family Law Act 1975 (Cth).

FAMILY COURT OF AUSTRALIA AT BRISBANE

This is an Application for costs arising out of an interlocutory hearing heard by me on 25 July 2016. Judgment was delivered on 27 July 2016. On 22 August 2016 the parties filed a consent order in the following terms:

That the question of costs in respect of the Application in a Case filed on 22 July 2016 be dealt with in the absence of the parties pursuant to rule 5.14 of the Family Law Rules 2004 (Cth).

That the husband file any further Affidavit he intends to rely upon in respect of costs and his written submissions as to costs by 4:00pm on 21 August 2016.

That the Wife file any further Affidavit she intends to rely upon in respect of costs and her written submissions as to costs by 4:00pm on 4 September 2016.

That each party ensure that the written submissions relied upon by each of them meet the requirements of rule 5.17 of the Family Law Rules 2004 (Cth).

Any other orders the Court deems necessary.

Accordingly, I have determined this matter in the absence of the parties.

In support of his application for costs, Mr HXXg (“the husband”) relies upon the following:

Sensibly no issue is taken by Ms CXX (“the wife”) for the late filing of the material relied on by the husband.

The wife opposes the application for costs and relies upon the following material:

The husband filed an Application in a Case on 22 July 2016 seeking permission to purchase further shares in Company B (“the company”) and to borrow approximately AUD$2,800,000 for that purpose. The wife opposed that course.

The need for the Application arose because of an Order made by Forrest J on 22 October 2015 restraining the parties from dealing with matrimonial assets without written consent of the other party or an order of the Court.

The husband sought the wife’s consent as detailed in his Affidavit filed 22 July 2016, through correspondence from his solicitor to the wife’s on the following occasions:

The wife responded by letter on 7 July 2016 stating that she did not ‘in principle’ oppose the purchase of the shares but opposed increasing liability for that purpose. She sought further information, which was provided.

In her letter dated 21 July 2016 she sets out her reasons for opposing the husband borrowing further funds.

The husband was successful in his application and now seeks that the wife pay his costs of and incidental to the Application in a Case (including the application for costs). A minute of the proposed order is attached to the written submissions filed on his behalf.

How costs applications are determined

The basic principle is that each party is to bear their own costs but s 117(2) of the Family Law Act 1975 (Cth) (“the Act”) grants the Court discretion to award costs in circumstances that justify such a decision.

Section 117 of the Act relevantly provides:

(1) Subject to subsection (2), ... each party to proceedings under this Act shall bear his or her own costs.

(2) If, in proceedings under this Act, the court is of opinion that there are circumstances that justify it in doing so, the court may, subject to subsections (2A), ... and the applicable Rules of Court, make such order as to costs ... , as the court considers just.

(2A) In considering what order (if any) should be made under subsection (2), the court shall have regard to:

(a) the financial circumstances of each of the parties to the proceedings;

(b) whether any party to the proceedings is in receipt of assistance by way of legal aid and, if so, the terms of the grant of that assistance to that party;

(g) such other matters as the court considers relevant.

Both parties provided written submissions in relation to the issue of costs. Counsel for the husband submits the following, in addressing the provisions of s 117(2A):

In relation to subsection (a), having regard to the pool of assets available, the wife can afford to pay a costs order;

Subsections (b) and (d) are not relevant in the circumstances;

The husband sought the wife’s consent by way of correspondence and answered the wife’s request for further documentation and information;

The wife required the husband’s personal attendance at Court despite being aware that the husband lived in Taiwan but did not make any application to cross-examine the husband at the hearing. Her request for him to be present was unreasonable;

The wife was wholly unsuccessful.

In relation to subsection (a), the wife has restricted access to financial resources and is reliant on monthly payments from the Taiwanese interests pursuant to the Order of Forrest J dated 22 October 2015. The wife has no capacity to pay a costs order;

Subsections (b) and (d) are not relevant in the circumstances;

The wife’s conduct was to consistently oppose requests that she consent to the husband’s proposal;

The wife’s opposition was “not without substantive grounds or merit” and “considered and not capricious”;

the husband was successful in his application because the Court decided to exercise its discretion based on the factual circumstances as presented by the husband;

In relation to subsection (g) each of the parties is presently funded in respect of legal costs by their corporate interests.

The pool of assets available for distribution in this case is significant and while the wife may not have immediate access to funds sufficient to meet a costs order at the moment, that is not a basis of itself to refuse to make a costs order.

I do not regard the conduct of the wife to be such as to warrant a costs order against her. Indeed her letter of 21 July 2016 demonstrates that she gave careful consideration to the husband’s request to borrow funds. It was unfortunate that the circumstances of urgency (that arose through no fault of either party) meant that further discussion and consideration could not be given to the husband’s request.

In relation to the request made by the wife for the husband to attend the hearing on 25 July 2016 for the purposes of cross-examination, I note that the letter from the wife’s solicitors refers to the fact that the husband had sworn his affidavit in Brisbane on 20 July 2016 and I infer from that statement that the request for his personal attendance was made on the basis of the understanding that he was in Brisbane. There is no evidence to the contrary and no evidence of any prejudice to him in having to remain in Brisbane for the hearing on 25 July 2016. Parties are expected to attend hearings unless excused.

This is not a court in which costs follow the event. Indeed s 117 of the Act makes clear that generally each party should bear their own costs.

There are no circumstances, in my view, that justify a departure from that general position. Accordingly, I will dismiss the Application for Costs.

I certify that the preceding twenty-two (22) paragraphs are a true copy of the reasons for judgment of the Honourable Justice Carew delivered on 28 October 2016.