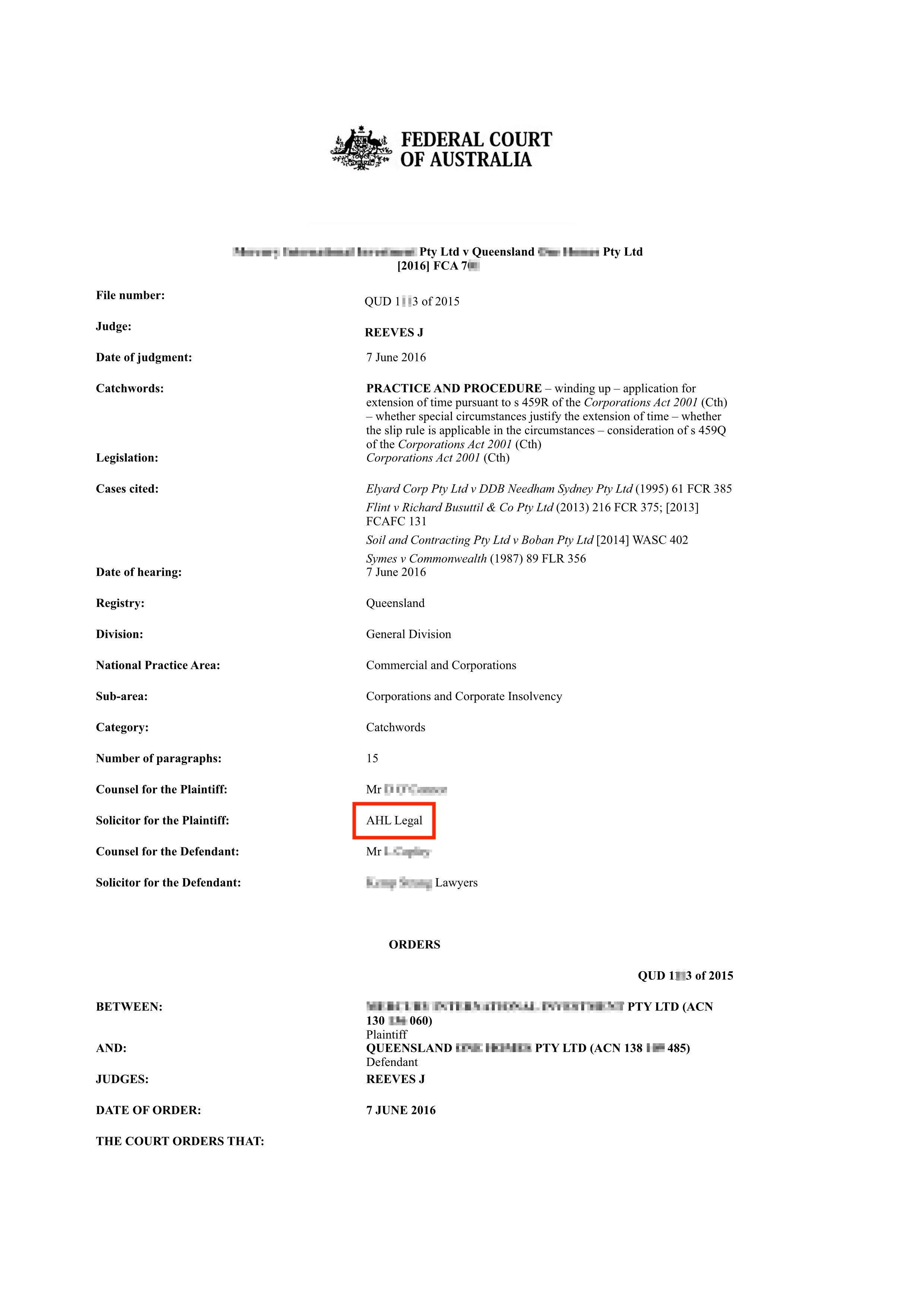 THE COURT ORDERS THAT:

The time prescribed by s 459(1) of the Corporations Act 2001 (Cth) be extended from and including 25 May 2016 until such time as the plaintiff’s originating application, as amended on 22 January 2016, is finally determined by the Court.

Queensland OXX HoXXX Pty Ltd, the defendant, has raised a preliminary point about whether this application remains extant. It has pointed to s 459R of the Corporations Act 2001 (Cth) (Corporations Act), particularly subsection (3) which provides that:

An application is, because of this subsection, dismissed if it is not determined as required by this section.

An application for a company to be wound up in insolvency is to be determined within 6 months after it is made.

The application in this matter was filed on 25 November 2015. Thus the six month period prescribed by s 459R(1) expired on 25 May 2016. To address this problem, MerXXXy International Investments Pty Ltd, the plaintiff, has applied for an extension of time under s 459R(2). That subsection provides that:

The court may by order extend the period within which an application must be determined, but only if:

(a) the court is satisfied that special circumstances justify the extension; and

(b) the order is made within that period as prescribed by subsection (1), or as last extended under this subsection, as the case requires.

Dealing with each of those requirements in turn, first, the special circumstances upon which MerXXXy relies are that this matter was initially set down for hearing on 12 May 2016, within the six month period, and adjourned over objection to today because Queensland OXX had failed to file its expert report by 22 April as required by the directions made by Greenwood J on 31 March 2016. That adjournment was allowed on the basis that Queensland OXX was to pay MerXXXy’s costs thrown away. MerXXXy submits that Queensland OXX is essentially responsible for the fact that this matter is now being heard outside of the six month period and that justifies a finding that there are special circumstances. I agree.

As to the second requirement, MerXXXy relies upon the slip rule. In Soil and Contracting Pty Ltd v Boban Pty Ltd [2014] WASC 402, an Acting Master of the Western Australia Supreme Court summarised the principles governing the application of the slip rule in these circumstances (at [15]). Two of the principles summarised affect the present application. At subparagraph (f) his Honour noted that:

[T]he rule is not confined to giving effect to the judge’s intention at the time when the judgment or order was made, but extends to the intention which the court would have had but for the failure by reason of which there was an accidental slip or omission.

I am satisfied that, if this issue had been raised before Greenwood J on 12 May, his Honour would have ordered the extension of time that I am being asked to order today. I therefore consider that the principle outlined above applies in this instance.

The other pertinent principle outlined by his Honour (at subparagraph (r)) was to the following effect:

[W]hen an order is made under the slip rule the correction speaks as from the date of the original judgment or order.

Applying that principle, if an order is now made in this matter under the slip rule, it will operate from 12 May.

However, Queensland OXX has raised a further objection. That is that it would be futile to order an extension of time in relation to MerXXXy’s application because it cannot succeed as a result of its failure to comply with three procedural steps. They are:

(a) its failure to file an affidavit of debt in accordance with s 459Q;

(b) it has not caused any notice to be published of the hearing of its application today; and

(c) it has failed to file an affidavit of search.

If an application for a company to be wound up in insolvency relies on a failure by the company to comply with a statutory demand, the application:

(a) must set out particulars of service of the demand on the company and of the failure to comply with the demand; and

(b) must have attached to it:

(ii) if the demand has been varied by an order under subsection 459H(4) a copy of the order; and

(c) unless the debt, or each of the debts, to which the demand relates is a judgment debt must be accompanied by an affidavit that:

(i) verifies that the debt, or the total of the amounts of the debts, is due and payable by the company; and

(ii) complies with the rules.

MerXXXy has filed an affidavit of a Mr ZhXXn ChXX, dated 22 January 2016, in which he deposes to the service of the statutory demands, two of which are relied upon to support the amended originating application. In paragraph 8 of his affidavit, Mr ChXX states that Queensland OXX was, on 2 November 2015, indebted to MerXXXy in the sum of $249,460.80 for unpaid selling fees pursuant to the sales agreements entered into from 28 March 2014 to 4 June 2015, which sum was then due and payable. However, after referring to the demands that were served in November 2015 (the relevant ones of which claimed $246,460.80, not $249,460.80). Mr ChXX states in paragraph 11: “The sum demanded remains due and payable by the defendant to the plaintiff”. Taking into account the provisions of s 459Q of the Corporations Act, I consider that this affidavit satisfies those requirements.

The second procedural defect alleged is that the hearing of this application has not been publicised. Rule 5.6(1) of the Federal Court (Corporations) Rules 2000 (Cth) requires:

Unless the Court otherwise orders, the plaintiff must publish a notice of the application for an order that a company be wound up.

The other subrules provide for the timing and form of that notice. I am unaware of any requirement that such a notice must be published prior to each occasion upon which an application is heard. I was provided with no authority to that effect. Even if I had been, I would, in the circumstances I have outlined above, relating to the adjournment of the hearing on 12 May, have waived compliance with that rule under r 1.3 of the Federal Court (Corporations) Rules 2000 (Cth), adopting r 1.04 of the Federal Court Rules 2011 (Cth). In doing so, I note that whatever prejudice has been suffered by Queensland OXX is essentially self-inflicted because it caused the delay between 12 May 2016 and today’s date.

The third requirement is the lack of an affidavit of search. I have not been addressed on whether or not that is required. If it is, I do not consider that its absence is, in itself, sufficient to justify my refusing to grant this extension of time.

For these reasons I allow the plaintiff’s application for an extension of time.

I certify that the preceding fifteen (15) numbered paragraphs are a true copy of the Reasons for Judgment herein of the Honourable Justice Reeves.