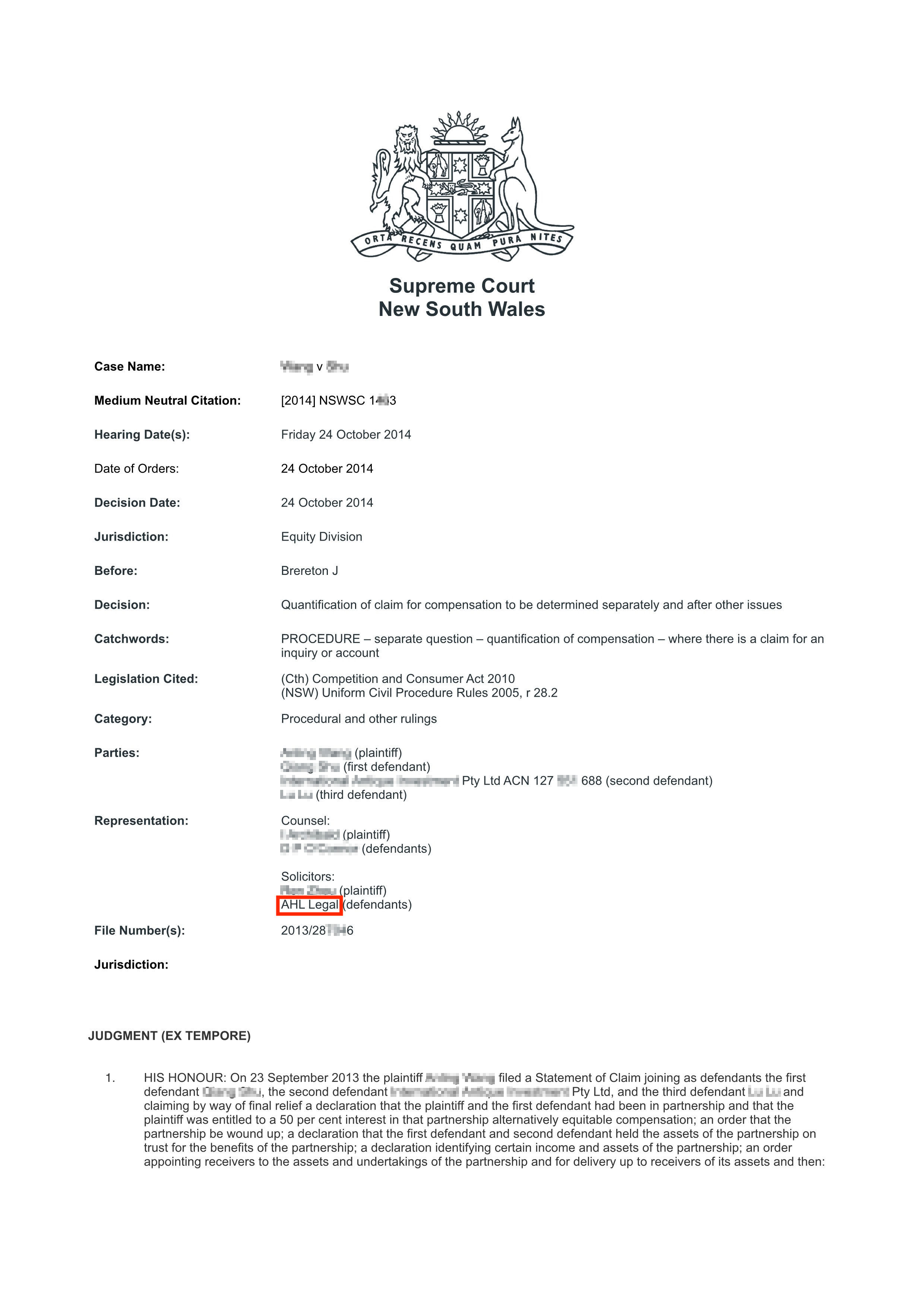 9. An order that the proceedings be referred to an associate judge for the taking of an account for the International AnXXXXe partnership.

10. An order that the proceedings be referred to an associate judge for an inquiry to be conducted into all of the dealings and transactions of the International AnXXXXe partnership, the assets and liabilities of the partnership at the date it was wound up and the amount earnt by the partnership from 14 September 2007.

and then an order that the defendants pay to the plaintiff the amount due on the taking of accounts.

The Statement of Claim further claimed damages for breaches of two loan agreements and purportedly for breach of a so called acknowledgement and then:

16. Alternatively such other compensation order against the first defendant under s237 of the Australian Consumer Law as the court thinks fit.

The plaintiff has been dilatory in the prosecution of the suit. She served one affidavit on 16 May 2014 (having failed to comply with a number of earlier directions for the service of affidavit evidence), and a further nine affidavits on 16 September 2014 (having defaulted in compliance with further directions made by the registrar). On 21 August 2114, so far as I can tell upon the insistence of the defendant, the Registrar set the matter down for hearing for three days in February 2015, but at the same time directed that any notice of motion for a "split trial" be filed within a limited time. That motion was duly filed on 11 September 2014 and it is that motion which is before the court today. Although it proceeds by way of specifying some eleven questions, including about six sub-questions to be the subject of preliminary determination under (NSW) Uniform Civil Procedure Rules 2005, r 28.2, in substance it seeks to defer for subsequent determination the quantification of any compensation that might be payable for contravention of the (Cth) Competition and Consumer Act 2010.

It seems to me that the main consideration is that in these proceedings, as framed, there was always going to be a "split trial", in the sense that if the plaintiff succeeds on its claims for breach of the partnership agreement or breach of fiduciary duty, then the relief it seeks, at least in terms of quantification, is by way of an inquiry and/or account of profits, pursuant to what was framed as a reference to an associate judge, but in current practice would either be conducted by a judge or a referee. In other words, as is not uncommon in proceedings in this Division, the question of quantification was always going to be decided, so far as the equitable causes of action were concerned, separately as a result of an inquiry or account.

Any such inquiry or account will involve an examination of the accounts of the business that the plaintiff says was an asset of the partnership. The claim for damages under the Competition and Consumer Act would also involve examination of substantially the same territory. Both cases will involve, in one way or another, valuing the partnership business in order to determine what ought to be paid or accounted for to the plaintiff in the one case, or what the plaintiff has lost in the other. In that way, it seems to me that there is a very close connection between the assessment of any damages that might be payable under the trade practices claim, and the quantification of the plaintiff's entitlements pursuant to the equitable claims. That to me is the most telling and ultimately decisive consideration in concluding that it is much more convenient that the quantification of damages on the trade practices claim take place concurrently with any account of profits, rather than be separated from it so that that exercise has to effectively be undertaken potentially twice. In addition, if the plaintiff fails on the question of liability either on the equitable claims or on the trade practices claim, that will mean no occasion will arise for the quantification of loss. If the plaintiff fails on one but succeeds on the other of them, that will define the precise basis upon which the quantification is to take place, namely whether it is an assessment of damages or an account of profits.

It is likely that the preparation of the case on damages, which does not yet appear to have commenced, will involve some complexities, will require discovery and in particular will self-evidently require expert evidence. So far as discovery is concerned the plaintiff says that that has not been sought to this point, because of the provisions of the practice note which limit opportunities to seek discovery until after the evidence is closed. It is not really a sufficient response to that argument to say that a notice to produce could have been served. First, a notice to produce of the type envisaged has to have a high degree of specificity and is limited to particular or specific documents. Secondly, such a notice ought not be used as a means to circumvent the practice note. The consequence of that is that it is very likely that if a separate trial were not ordered, and orders were now made for discovery so as to permit the adducing of expert evidence on matters of quantification, the February hearing dates would be jeopardised.

Despite the defendants' submissions, it seems to me that it is in the interests of both parties that at least the question of liability be speedily resolved, and that the best way of ensuring that that happens is to defer the question of quantification of loss.

The court therefore orders that:

(1) Pursuant to Uniform Civil Procedure Rules, r 28.2, the quantification of the claim for equitable compensation referred to in prayer 3(b) and of the damages or other compensation referred to in paragraphs 15 and 16 of the Statement of Claim (but not the damages referred to in paragraphs 12, 13 and 14) be determined separately and after determination of the other claims for relief in the proceedings to the intent that those claims be determined concurrently with any account or inquiry that might be ordered pursuant to claims 9 and 10 in the statement of claim;

(2) The costs of the motion be the plaintiff's costs in the proceedings.