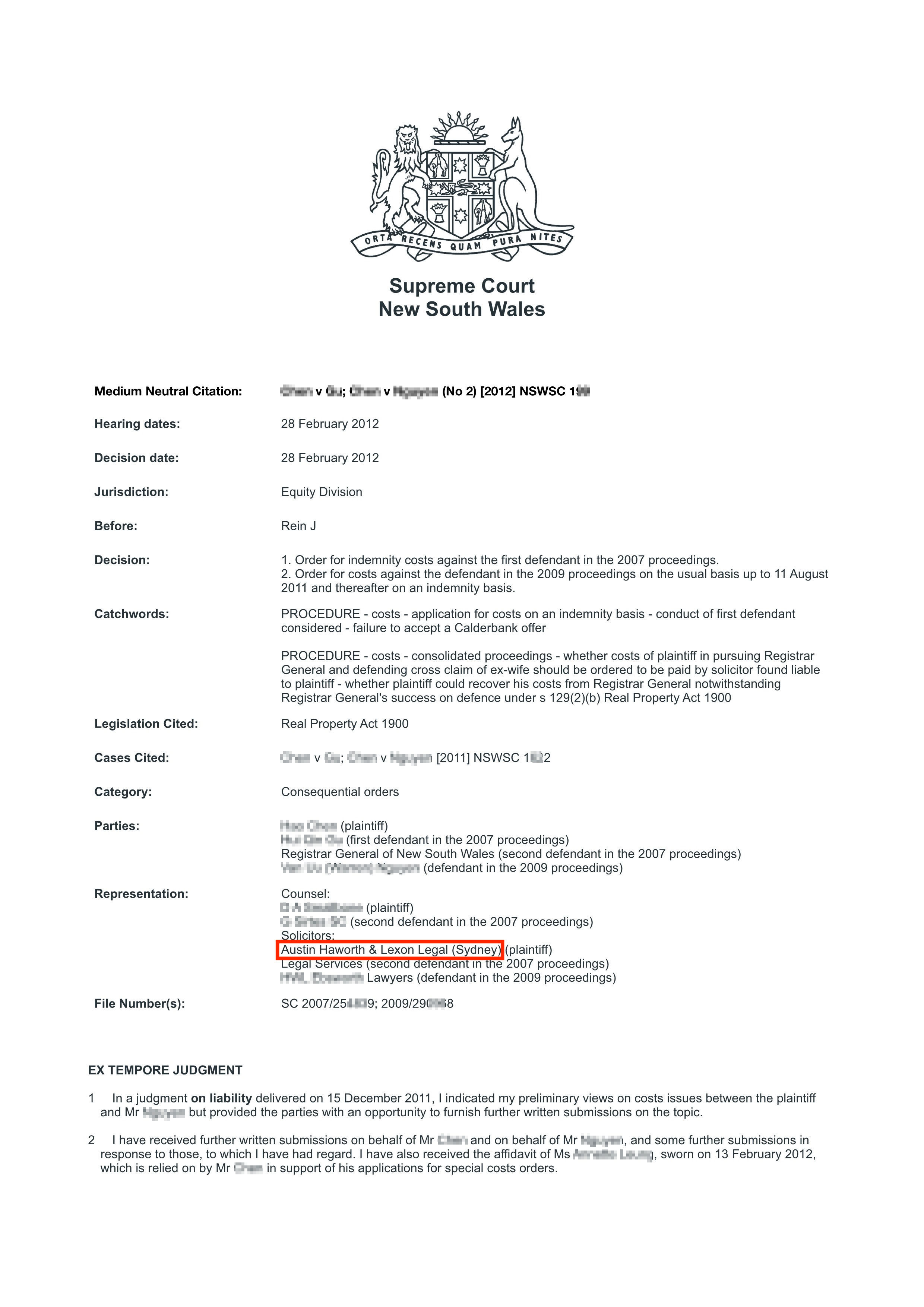 1 In a judgment on liability delivered on 15 December 2011, I indicated my preliminary views on costs issues between the plaintiff and Mr NgXXen but provided the parties with an opportunity to furnish further written submissions on the topic.

2 I have received further written submissions on behalf of Mr ChXX and on behalf of Mr NgXXen, and some further submissions in response to those, to which I have had regard. I have also received the affidavit of Ms AnXXXXe LeXXg, sworn on 13 February 2012, which is relied on by Mr ChXX in support of his applications for special costs orders.

3 On 15 December 2011, Mr SmaXXXone of counsel indicated that Mr ChXX would seek an order for indemnity costs against Ms GX. I have received written submissions on behalf of Mr ChXX on that topic as well.

4 No submissions were made on behalf of Ms GX. Indeed there has been no appearance today on her behalf. Mr SmaXXXone informs me that his solicitor received yesterday a notice of ceasing to act by Ms GX's solicitors.

5 I will deal firstly with the question of indemnity costs against Ms GX. I have already made an order that Ms GX pay Mr ChXX's costs of the proceedings; that order was not opposed. The plaintiff submits that, having regard to the conclusions reached by the Court as to Ms GX's conduct of the case, the case is one in which an order for indemnity costs is appropriate.

6 It was submitted by Mr ChXX that Ms GX must have known throughout the proceedings that her allegations in the proceedings, by which she sought to justify her dishonest conduct, were false and they were allegations which caused the trial to be prolonged. The second aspect is her refusal to settle, even when offered a settlement on a walk-away basis (said to have been made to her on the understanding that she did not have substantial assets in New South Wales), and her refusal to take part in a proposal for mediation.

7 On 1 May 2008, the plaintiff through his solicitor made an offer to Ms GX to resolve the case on the basis that each party pay their own costs: see page 1 of Exhibit AL-1 to Ms AnXXXXe LeXXg's affidavit. That offer, in the form of a Calderbank letter, was rejected. Mr ChXX has obtained a judgment against Ms GX for the full amount of the claim.

8 I think that the offer made on 1 May 2008 was very favourable to the plaintiff and ought to have been accepted. Having regard to the nature of Ms GX's defence and the manner in which she conducted her case, which included her seeking to justify her forging of Mr ChXX's signature on four documents and denying that she had presented her cousin as Mr ChXX to Mr NgXXen, her solicitor, and the absence of any opposition on her part to the orders now sought, I think it is appropriate that an order for indemnity costs be made against her for the entire proceedings.

9 Dealing with the costs orders against Mr NgXXen, I have noted Mr NgXXen accepts that he is liable to pay Mr ChXX's costs of the case against him. Further, he now accepts that Mr ChXX is entitled to an order for indemnity costs as and from 11 August 2011, when an offer of compromise was made but not accepted, and Mr ChXX having obtained a judgment as favourable to him as the offer of compromise.

(1) he should not be required to pay any costs of Mr ChXX in pursuing the Registrar General of New South Wales;

(2) he should not be ordered to pay any of the costs in matter 2009/29XX68 to the "extent they were incurred in prosecuting the plaintiff's claim for fraud against Ms GX": see paragraph 3(c) of the Submissions on Behalf of Mr NgXXen in Relation to Costs of February 2012 ("Supplementary Submissions on Costs"); as it has been found by the Court that Mr NgXXen was not aware of the fraudulent conduct of Ms GX at [35] of ChXX v GX; ChXX v NgXXen [2011] NSWSC 1XX2, this aspect of the plaintiff's case has nothing legally to do with Mr NgXXen;

(3) no Bullock or Sanderson order should be made in respect of the Registrar General's costs.

I should note that for the period prior to 11 August 2011, Mr ChXX seeks costs only on the usual basis.

11 Dealing with the first issue, I set out the view which I expressed on a preliminary basis at [160] of ChXX v GX; ChXX v NgXXen based on the Outline of Submissions on Behalf of Mr NgXXen in Relation to Costs received at the hearing on 15 November 2011:

(1) Mr NgXXen's solicitors denied liability by letter of 6 April 2004 and suggested that Mr ChXX bring a claim against the Torrens Assurance Fund (see pages 760-761 and 783 of Exhibit A3);

(2) the Registrar General had a defence to the claim on the Torrens Assurance Fund if Mr NgXXen was negligent thereby causing loss to Mr ChXX and was to be indemnified by LawCover;

(3) Mr NgXXen has maintained, prior to the commencement of proceedings against the Registrar General and since then, that he was not negligent and did not cause the plaintiff's loss: see pages 760-761 and 783 of Exhibit A3;

(4) two of the issues in the case against the Registrar General are identical to that in the case of the claim against Mr NgXXen (i.e. was Mr NgXXen negligent, and if so, did his negligence cause loss to Mr ChXX);

(5) the loss of title which led to a claim on the Torrens Assurance Fund and against Mr NgXXen arose entirely without any fault or error or omission on the part of the Registrar General and did arise by reason of a breach of duty to Mr ChXX by Mr NgXXen (in addition to the fraudulent conduct of Ms GX); and

(6) the active adoption (and even expansion) by Mr NgXXen of Ms GX's defence against Mr ChXX's claim;

my preliminary view is that Mr ChXX is entitled to an order for all of his costs of the proceedings, including his case against the Registrar General."

12 The two proceedings were, well before the hearing and over the opposition of Mr NgXXen, ordered to be consolidated, and rightly so in my view. So far as Ms GX's cross claim and the claim in fraud is concerned, it is artificial in the extreme, in my view, to put forward these issues as separate from the essential position of Ms GX, which was embraced and promoted by Mr NgXXen (or to be fair to him, by those acting on his behalf). The claim for $500 per week was linked by Ms GX with the principal ChXX/GX issues and the malicious prosecution claim was something which could only arise if Ms GX's defence was upheld. I do not regard it as appropriate to excise those matters from the order for costs in favour of Mr NgXXen. I accept that Mr NgXXen was not found (or alleged) to have known of Ms GX's fraud at the time he purported to act for Mr ChXX, but in his defence of the case against him he chose to align his case with Ms GX, aware of the allegations of Mr ChXX and aware of the fact that Mr XX had been presented to him as Mr ChXX, that Ms GX had not told him that she was separated or divorced from Mr ChXX and that she had forged Mr ChXX's signature on four documents.

" Circumstances in which compensation payable

(e) the person having been deprived of the land, or of any estate or interest in the land, as a consequence of fraud, ...

is entitled to payment of compensation from the Torrens Assurance Fund.

(2) Compensation is not payable in relation to any loss or damage suffered by any person:

(b) to the extent to which the loss or damage:

(i) is a consequence of any fraudulent, wilful or negligent act or omission by any solicitor, licensed conveyancer, real estate agent or information broker, and

(ii) is compensable under an indemnity given by a professional indemnity insurer".

18 Nothing has been advanced on behalf of Mr NgXXen to cause me to alter my view that the appropriate order is that Mr NgXXen should pay all of Mr ChXX's costs of the proceedings.

19 It follows that Mr ChXX is entitled to an order for indemnity costs against Ms GX and an order for costs of the proceedings against Mr NgXXen on the usual basis up to 11 August 2011 and thereafter on an indemnity basis.