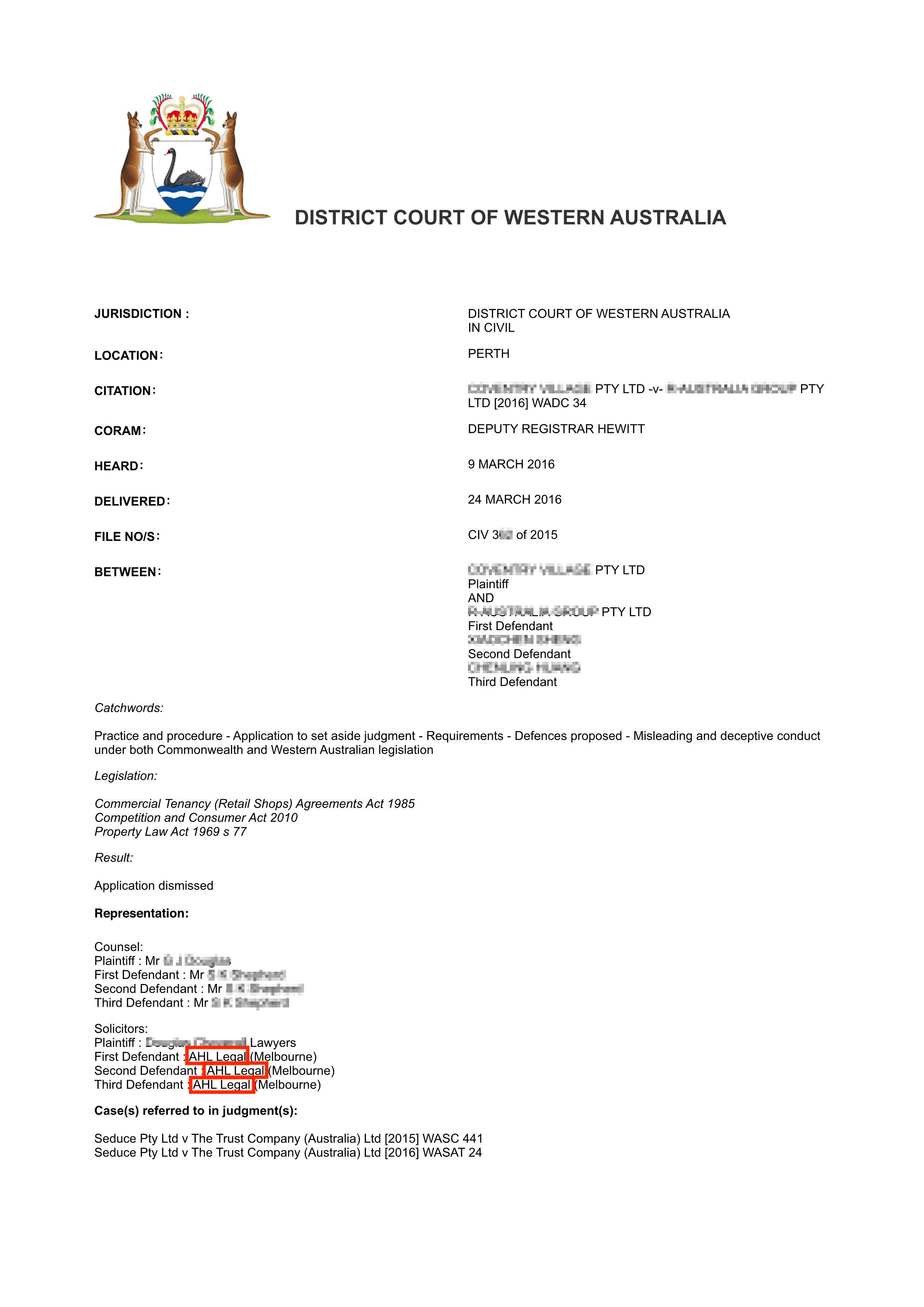 1 DEPUTY REGISTRAR HEWITT: This action was commenced by a writ filed on 5 February 2015. An affidavit of service was filed and the court was satisfied that service had been achieved. As the consequence of the failure of the defendant to file an appearance a default judgment was entered. Subsequently the plaintiff applied for assessment of damages and that assessment took place before Deputy Registrar Harman who assessed the damages to be $375,997.12 and judgment was entered in that amount on 31 August 2015. By application filed on 7 December 2015 the first defendant, being the only one of the defendants the subject of the judgment, applied to set aside the default judgment. A number of contentions have been raised to support that application. The first contention raised was that the service of the writ was defective having been sent to an address other than the registered office of the first defendant company. The evidence before me establishes that the writ or at least a copy of it was posted to the first defendant addressed to that company at XX Russell Street, Morley. Evidence has been placed before me to indicate at the relevant time that was the registered office of the company. A subsequent change of address notice was filed changing the address for service of the company to 1XA Russell Street. The notice sought to retrospectively change the address of the registered office of the company to 1XA rather than 1X. It has been pointed out for counsel for the defendant that retrospective change would have had the effect of altering the address of the registered office at about the time that the writ would have been delivered by ordinary course of post. He has voiced some suspicion about the reason for that process and I share those concerns but at the end of the day nothing turns on those matters because the variation was not accepted and was made on a date well after the date upon which the writ would have been delivered. On that basis therefore I conclude that the writ was served on the first defendant and was regularly served.

2 It is also worthy of comment that a later document being an appointment for assessment of damages was posted to the new address and that also elicited no response.

3 Therefore insofar as the applicant seeks to have the judgment set aside on the grounds of irregular service or non-service I reject those grounds. That being the case, it is necessary for the defendant to satisfactorily explain the reasons why it did not defend the action, the delay in bringing this application and to establish an arguable defence on the merits.

4 As to the delay the defendant alleges, it did not receive the writ and was therefore unaware of the action. I regard that proposition as plausible but weakened by the fact that the notice of appointment to assess damages, even though forwarded to what the defendant contends was the correct address, was likewise ignored. In my view the defendant has raised sufficient to satisfy the first limb and I now turn to consider the proposed defence advanced.

5 The first issue raised by the applicant concerns the alleged misrepresentations characterised as misleading and deceptive conduct said to have induced the officers of the first defendant to enter into the lease upon which the plaintiff relies in the cause of action which it pursues against the first defendant. The misleading and deceptive conduct might be broadly described as of three types, one being an expression of optimism about the trading future of the centre in which the leased property was situated and the rosy prospects of a restaurant operating in those premises secondly the quality of the fit out for those premises which was intended to be provided and finally for provision of access from the inside of the supermarket complex to allow patrons to enter the restaurant from the foyer of the complex rather than from the street outside. In my view the evidence supporting those allegations is thin and I make that remark in light of the fact that in the currency of the lease the first defendant renegotiated some of the terms of the lease to more favourable conditions, a proposition which seems to me to be inconsistent with what is now suggested to be a right to avoid the lease in its entirety and secondly in taking up the lease the first defendant submitted plans of the proposed layout of the restaurant which on my perusal of those plans would make access from within the complex difficult or impossible. It also appears to me from the material before me that the restaurant was built in compliance with or substantial accordance with the plans, making rear access, at the least, an expensive proposition.

7 The next contention advanced by the first defendant is that the writ is defective in that the plaintiff is a trustee but has not been declared as such in the indorsement of the writ as is required by O 6 r 5. A number of alternatives are available in the event that an indorsement is defective and I have regard to provisions of O 2 of the Supreme Court Rules 1971 which in my view allow me to regard the failure as a mere irregularity and one which can be cured by amendment. I am unable to perceive the slightest prejudice to the first defendant were I to allow such an amendment and that to my mind would adequately dispose of the point which is raised.

10 We therefore have a situation where a judgment has been obtained by the plaintiff, which is the registered proprietor of the land in which the leased premises is located and is therefore entitled to enforce that lease. I find the judgment to be regular and none of the bases which have been advanced by the first defendant to attack the judgment are, in my view sound. I therefore intend to dismiss the first defendant's application but in doing so I shall invite the plaintiff to amend the writ to regularise what I regard as a failure of form rather than a failure of substance that is the omission of the representative capacity in which the plaintiff sues from the indorsement of claim. That so far as I am concerned is not a matter which could possibly bring any prejudice to the first defendant and accordingly forms no basis upon which I should set aside the judgment.